On hold at CarMax Dulles, VA

About the Nissan Versa

The most recent generation of Nissan Versa has been in production since 2012, with a few minor changes throughout the years. This sub-compact vehicle offers seating for up to five people, making it a great choice for singles, couples, or even those with small families. If you're in the market for a small vehicle that is easy to maneuver and doesn't come with too many frills, the Versa may be an ideal choice. Learn more about the Nissan Versa's many different model years and trim configurations, as well as how it stacks up against other vehicles in its class.

Nissan Versa vs. Other Cars

When stacked up against similar vehicles, there are a few distinguishing factors to be aware of if you're shopping for a Nissan Versa.

Size-wise, the Nissan Sentra (a compact) is a larger vehicle than the Versa (a sub-compact); still, both vehicles max out at seating for five people. The Sentra does come in more available trim configurations (seven in the 2018 model year, to be exact), which offers greater customization. The Sentra also has an available turbocharged 1.6L engine in some trim levels, whereas the Versa comes with only one standard engine option.

The Hyundai Elantra also offers seating for up to five people, but does so with more overall space than the Nissan Versa. The 2018 Elantra also comes with more standard features than the Versa in its base SE trim. Some of these features include a six-speaker sound system, height-adjustable driver seat, and USB port.

As a compact car, the Toyota Corolla offers a little more space than the Versa's sub-compact body. Still, seating maxes out at five people for both vehicles. The Toyota Corolla does come with more trim options, with six trims available for the 2018 model year (versus three trims for the 2018 Versa). The 2018 Corolla also comes standard with a more powerful base engine at 1.8L and 132 horsepower, compared to 1.6L and 109 horsepower in the 2018 Versa base S trim.

Q: How many people does a Nissan Versa seat?

A: Seating capacity for all model years of the Nissan Versa maxes out at five people; this includes two in the front seat and up to three in the rear row.

Q: What kind of engine does a Nissan Versa have?

A: The 2018 Nissan Versa comes standard with a 1.6L four-cylinder engine at 109 horsepower.

Q: What kind of mileage does the Nissan Versa get?

Q: Is the Nissan Versa automatic?

It is easy on gas, reliable so far, fits into any parking spaces. Keeps up with freeway traffic but slow on hills. Great on gas! We save a lot on all our driving! I just think it's a very sweet little car.

good value for the price 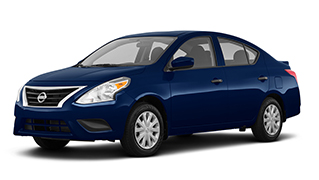 Tue, Dec 15, 2020
Small cars come with plenty of features and options, designed for maximum practicality and drivability. To help you on your search, we've compiled a list of the 10 best small and compact cars for 2021 shoppers, based on CarMax sales data from May 1, 2020 through October 31, 2020.
Read More