Only available at CarMax Frederick, MD

About the Mitsubishi Mirage

If you’re in the market for a compact hatchback sedan, you need to check out the Mitsubishi Mirage. The Mirage offers the excellent maneuverability and handling of a compact sedan with plenty of great features. Check out our overview of the 2014-2018 Mitsubishi Mirage hatchback to find out more about its unique features, Mitsubishi Mirage specs, and trim options available from one model year to the next.

For the 2014 model year, for instance, some standard features include automatic climate control and keyless entry. And in terms of Mitsubishi Mirage gas mileage, its 1.2-liter, three-cylinder engine with automatic transmission gets an estimated 39 mpg combined.1 For the Mitsubishi Mirage 2015, Mitsubishi did some refining by shortening the vehicle's radio antenna and adding some chrome features to the exterior. The ES trim saw some upgraded features, such as new upholstery and turn-signal repeaters on its side-view mirrors.

The Mitsubishi Mirage took a brief hiatus for the 2016 model year, but production picked back up for the Mitsubishi Mirage 2017. For this model year, there were notable changes that included redesigned headlights and taillights, a redesigned bumper, and different interior styling. From an engine standpoint, the horsepower on its 1.2-liter engine was ramped up slightly to 78 horsepower (compared to 74 horsepower previously). The 2017 model also offered new trim levels.

The Mitsubishi Mirage 2018 didn't see any significant changes or redesigns, though it does get some new standard features that include Bluetooth® connectivity, a seven-inch touchscreen, and a rearview camera. In terms of Mitsubishi Mirage mpg, fuel economy has remained pretty consistent over its several years of sixth-generation production; the 2018 Mirage with 1.2-liter base engine also gets an estimated 39 mpg combined—the same as its 2014 version.1 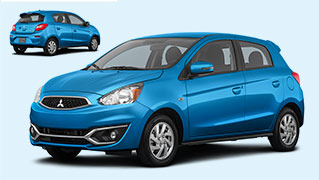