About the Honda Ridgeline

The Honda Ridgeline is a midsize truck that was introduced for sale in late 2004. Production of the Ridgeline ceased after the 2014 model year and picked back up with a complete redesign in 2017. Since then, the Honda Ridgeline has become a popular choice among truck-buyers for its utility, comfortable ride, and practical features. In recent model years, even its base trim comes with some features to make drivers' lives easier, including a power-locking tailgate and a rearview camera. If you're in the market for a midsize truck that delivers on all fronts, be sure to add the Honda Ridgeline to your list of possibilities.

A: Yes. The Honda Ridgeline did go on a production hiatus after the 2014 model year, but its current generation of production began in 2017.

Q: Is the Honda Ridgeline a full-size truck?

A: Technically, the Honda Ridgeline is marketed as a midsize truck.

Q: Does the Honda Ridgeline have four-wheel drive?

A: In the most recent generation of production (2017-present), the Honda Ridgeline offers all-wheel drive for sale as an option in its RTL and Sport trims. The RTL-E and Black Edition trims come standard with all-wheel drive.

Q: What kind of mileage does the Honda Ridgeline get?

Since the newest generation of Honda Ridgeline debuted in 2017, this midsize truck has been available for sale in six trim configurations. The following features are based specifically on the 2018 model year.

Honda Ridgeline vs Other Pickup Trucks

While the Honda Ridgeline is a top contender in the midsize truck category, it does have some competition. Let's see how the Ridgeline compares to some of its top challengers.

Unlike the 2018 Ridgeline, which comes with only one engine option (a 3.5L V6), the 2018 Toyota Tacoma is available with two engine options. One is a 2.7L four-cylinder engine at 159 horsepower, which comes standard in three of the six trim levels offered. An upgraded 3.5L V6 at 278 horsepower comes in the upper three trim configurations.

The Chevy Colorado offers a little more in terms of variety; specifically, the 2018 Colorado is available not only in five trim levels, but two different bed lengths and crew- or extended-cab body styles. The 2018 Ridgeline, on the other hand, does come with a more powerful standard engine (3.5L V6), whereas the 2018 Colorado's base engine is a 2.5L four-cylinder. Still, the Colorado has two optional engines from which to choose, including a 3.6L V6 and a turbocharged 2.8L four-cylinder.

When comparing the 2018 Colorado base trim with its 2.8L, four-cylinder engine to the 2018 Ridgeline base trim with 3.5L V6 engine, the Colorado wins out in fuel economy at an estimated 25 mpg combined.1

The 2018 GMC Sierra is available in four trim levels compared to the 2018 Ridgeline's six, though it does come with some nice standard features that include a touchscreen interface and automatic xenon headlights. The 2018 Sierra also comes with an impressive standard 4.3L V6 engine at 285 horsepower. Two other optional engine choices include a 5.3L V8 and a 6.2L V8. The more powerful engine in the 2018 Sierra does come with a lower fuel economy, as the base trim with 4.3L V6 engine gets an estimated 20 mpg combined.1

Wonderful car at a great price

The Ridgeline exactly fit my need for a four-door pickup that would haul at least a 4000# trailer, has a/c in the back seat, and the a/c cools incredibly quickly. On riding in it for the first time my daughter said that it rides like a SUV and my son-in-law said that it was the car they should have bought instead of a ford pickup.

I’ve never owned a pickup. I wanted a vehicle with utility features for camping and home repairs and outdoor activities. The comfort inside is equal to a SUV and the drivability is just what I wanted. 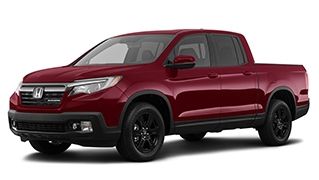 Tue, May 07, 2019
The Honda Ridgeline is a unique truck with plenty of exciting features and excellent performance. Check out our Honda Ridgeline review for this vehicle’s key specs, features, rankings, photos, and more.
Read More 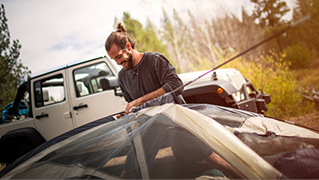 Thu, Jul 16, 2020
RVs and camper trailers are great for summer camping transportation needs, but there are less expensive ways to get out into nature. Edmunds recommends five vehicles across five categories that can serve as both your daily driver and campsite transport.
Read More