Used Audi A4 for Sale

About the Audi A4

The Audi A4 has been in production since 1994. During that time, the A4 has consistently remained one of the most well-liked luxury sedans on the road. With impressive styling, powerful performance, and useful, refined technology, the Audi A4 has plenty to offer for those who are looking for a top-of-the-line sedan.

The fourth generation of the Audi A4, known as the B8 Series, began with the 2008 model, which Audi unveiled in September 2007. The new generation Audi A4 featured a redesigned body, a lighter weight, and more cargo and passenger space.

The fourth-generation Audi A4 (2008 - 2015) comes in a wide range of engine and transmission options, depending on the exact trim and year model that you choose, including a TDI diesel engine, an inline-four petrol engine, and a V6-petrol engine, as well as both automatic and manual transmission options. Power has always been a priority for the Audi A4. For example, the 2014 Audi A4 comes with a 2.0 TFSI® turbocharged and direct-injected, four-cylinder engine that provides a total of 220 hp.

The Audi A4 has a history of being ahead of its time when it comes to technology features as well. For instance, the Prestige trim of the 2013 Audi A4 features technology such as a 14-speaker Bang & Olufsen® sound system, a parking system with a rearview camera, adaptive cruise control, and more.

The Audi A4 got a facelift in 2012, which saw updates to its exterior such as LED headlights and taillights, twin exhausts, and updates to the interior. This includes a redesigned ignition key, a three-spoke steering wheel, and chrome clasps added to the interior controls.

Starting with the 2016 model, Audi began the fifth generation B9 Series of the Audi A4. For the fifth-generation Audi A4, the vehicle was made slightly larger, but was also designed to be lighter in weight. The fifth-generation Audi A4 comes equipped with a range of different engines depending on the year model and specific vehicle that you choose, including four-cylinder and V6 engines, as well as petrol and diesel engines.

The fifth-generation Audi A4 comes available in three different trims:

RepairPal gave the Audi A4 an overall reliability rating of 3.5 out of 5 stars, which RepairPal describes as Above Average. This rating ranks the Audi A4 14th out of 31 among luxury midsize cars.

Reviews for Audi A4

Best value in a wagon, too bad They don't make them in the US anymore.

This is the best driving car I have ever owned. I had the 2006 A6 Avant and traded it for this. The 2.0T is so much smoother and shifts so much better. The A6 had a jumpy start unless you squeezed the gas peddle just right and when going up hill it would stay in 2nd too long, sounded like a rocket. The A4 2.0T Quattro is much quieter and smoother to drive. The loss in space is unnoticeable to me, it has plenty of space.

Very painless car shopping experience. No haggle price took all of the stress out of buying a car. Car was delivered exactly how it was described with no hidden fees! Love the car...almost three years old but looks and drives like a brand new car. I have never owned a 'luxury' car before so it quite a treat.

Great looking car but had issues once I bought it.

It’s a very nice car but the con was that as soon as I got it it had issues. It spent weeks in carmax getting fixed & I feel like it still has issues that could have been fixed but was there so long that the 30 warranty felt like couple of weeks. 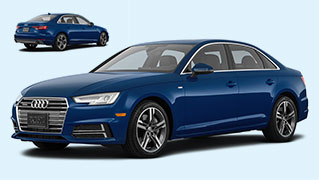 Audi A4: Reviews, Photos, and More

Audi A4: Reviews, Photos, and More

Thu, Dec 06, 2018
The Audi A4 is a premier luxury sedan with plenty of exciting features. Check out our Audi A4 review and explore specs, features, photos, and customer reviews.
Read More