About the BMW X4

The BMW X4 is a luxury compact SUV that was introduced in 2015 and redesigned for 2019. It is a good choice if you're looking for an upscale SUV with sporty engine options and standard all-wheel drive. The second-generation X4 (introduced in 2019) comes with two engine options: a 248-horsepower turbocharged four-cylinder in the base xDrive30i trim or a 355-horsepower turbocharged six-cylinder engine in the higher-level M40i trim.

Unless otherwise noted, information related to these featured vehicles comes from third-party sources, including manufacturer information. Product and company names may be trademarks or registered trademarks of third-party entities. Use of them does not imply any affiliation with or endorsement by these entities.

A: The BMW X4 comes with standard all-wheel drive in all model years and trim levels. Although this is slightly different from true four-wheel drive (which is better for off-roading) the BMW's all-wheel-drive system makes it appealing to drivers in colder climates who are regularly navigating icy or snowy roads.

Q: Does the BMW X4 have a panoramic roof?

Q: What's the difference between BMW X4 and X6?

A: The BMW X6 has a more powerful engine than the X4 but does not come standard with all-wheel drive—although it is an available option on the X6's xDrive35i and xDrive50i trims. The 2019 X6's base engine is a 300-horsepower turbocharged six-cylinder, with optional V8 engines that produce 445 or 567 horsepower.

A: The BMW X4 is a crossover SUV that has five doors. It has a rear liftgate but more in the manner of an SUV than a hatchback.

A: The BMW X4, like all of BMW's X models, is manufactured in Greer, South Carolina. The plant is known as Plant Spartanburg and is the biggest BMW production facility in the world.

The second generation of the BMW X4 (launched in 2019) is available in two trim levels: 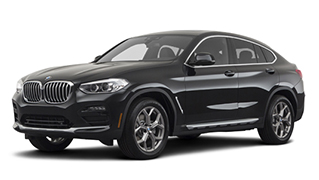 Wed, May 13, 2020
The BMW X4 is a sporty and stylish compact SUV, boasting brisk acceleration and a luxurious interior with generous features. Whether you need a daily commuter or a date-night cruiser, the X4's attractive styling and ride comfort will grab your attention. Learn more in this 2020 BMW X4 review.
Read More